The History of the Blue Mountains 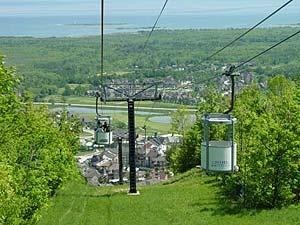 The Blue Mountains and the surrounding areas of Creemore, Thornbury, Meaford, Wasaga Beach, Tiny Townships and all the way south to Mulmur make up our selling area known as the Georgian Triangle.

The area was primarily known for the skiing at Blue Mountains the skiing at Blue owes its start primarily to Jozo Weider who was born in Zhilina in 1908, in the eastern or Slovak part of Czechoslovakia, Jozo Weider’s destiny would forever be linked to mountain environments when, in his early 20s, he built an isolated chalet in the Carpathian mountains. It would remain his home throughout the 1930s and from which he was able to earn a living as an innkeeper, mountain guide and photographer. In 1939, Weider took a trip to Britain to promote tourism for his resort. He was still in Britain when the Germans invaded Czechoslovakia in the spring of 1939. An urgent telegram to his wife enabled her to leave the country with their one year-old son and join him in England where they applied for status as political refugees.

In the summer of 1939, they emigrated to Canada and to a hard life as settlers in what was then the frontier settlement of the Peace River. Later that year, he traveled east, to Quebec where he found work as a ski instructor at the Chateau Frontenac. A year later, after deciding to return to the ski business, he moved back to Quebec with his family to teach for another season at the Alpine Inn in Ste. Marguerite. It was there that he met Peter Campbell, later appointed to the Senate, who was involved in the development of the ski area at Collingwood, Ontario. He would become Jozo Weider’s financial partner and backer throughout most of Jozo’s career. Arriving in Collingwood in the spring of 1941, Jozo Weider’s legendary enthusiasm and capacity for hard work were quickly confirmed; it was perhaps inevitable that Collingwood’s Blue Mountain would become one of Canada’s largest and most dynamic ski areas with 28 trails and 15 lifts on 800 acres of escarpment land.

Shortly after his death in 1971, the Collingwood Enterprise-Bulletin noted in its October 6th, 1971 edition, “There are very few men who are born with the gift of vision, perseverance and physical ability which this undertaking (Collingwood) required.” it would go on to say, “It has always been difficult to consider Jozo a Canadian…He was a citizen of the world, in mind, in knowledge and in experience. However, he was one of the greatest promoters of Canadian life that we will ever know, He was good to Collingwood, and he was good for Collingwood. He influenced our thinking, swayed our opinions and often influenced our decisions…but he never led them astray…It is doubtful if the complete contribution to Collingwood and district, and its people, will ever be known.” To those thoughts might be added that Jozo Weider’s influence was not restricted to Collingwood but also to the larger arena of international skiing traceable through the exploits of well-known Canadian alpine competitors who grew up on the mountain, Todd Brooker, Liisa Savijarvi, Kellie Casey and the legendary Ernie McCulloch, Director of the Ski School, in particular.